Chinese social app TikTok that was trending from the previous one year has been banned in Pakistan due to the continuous uploading of ‘immoral, indecent’ content.

ISLAMABAD: Today, Friday 09-10-2020, Pakistan telecommunication Authority banned the video-sharing most trending app of TikTok in Pakistan due to the “immoral and indecent” content. According to the press release in action to the “complaints” and the “nature of the content being consistently posted on TikTok,” Today, PTA issued a “final notice” to the app.

This decision has been taken after multiple complaints from different sectors of the society said by the telecommunication company of the Pakistan PTA in their statement that was presented by them on Friday.

“TikTok was given “considerable time” to respond and comply with instructions to moderate “unlawful online content effectively,” said PTA.

“Keeping in view the complaints and nature of the content being consistently posted on TikTok, PTA issued a final notice to the application,” the statement said.

“However, the application failed to comply with the instructions fully. Therefore, directions were issued for blocking of TikTok applications in the country.” 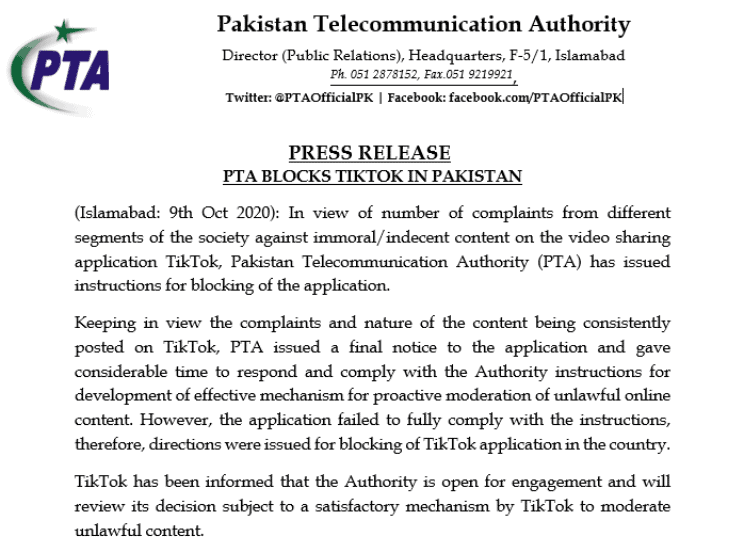 According to the PTA, TikTok has been informed about the continuous uploading of awful ‘immoral, indecent’ content. They should review their decision subject to satisfactory mechanisms by TikTok, but now they moderately accommodate unlawful, ‘immoral, indecent’ content.
In July, “the regulator issued a “final warning” to the short-form video app over explicit content posted on the platform.”

The China-based Bite Dance-owned social media app has already been caught in a global firestorm due to security and privacy concerns. It has already been blocked in India and is under scrutiny in countries ranging from Australia to the United States.

Comments on the matter were not immediately available on Twitter.

The decision was taken after Prime Minister Imran Khan took a keen interest in the matter. A government official told Reuters news agency, adding that Khan had instructed telecom officials to visit the conservative country. I was hoping you could make every effort to prevent content that I deem illegal.
The move comes months after the live app Bigo Live was banned and video-sharing platform YouTube was warned to stop “obscene and hate speech.”

In 2016, Pakistan’s parliament passed the Pakistan Electronic Crimes Act (PECA), among other Internet issues.
It gave the PTA broad powers to block material perceived as “against the greatness or integrity of Islam, security or defense of Pakistan” or “public order, decency or ethics.”
Rights groups say the PTA has blocked more than 800,000 websites and platforms from entering the country.
The list of blocked websites includes pornographic platforms and provides news critical of the country’s security and foreign policies, some social media, and some political party websites.

Become a Sensation: How to Get More Followers on TikTok

What is the Finest Herbal Vape Juice on Social Media?